India and the UK have a ‘broad and deep relationship’ and ever closer collaboration can only be good for the world. That’s according to foreign minister, Mark Field.  In a statement to the special business summit and Indian Awards 2019, the minister for Asia said the UK-India relationship was a special one underpinned by a ‘living bridge’ between its people.

“From prosperity to security, climate change to technology, the UK-India relationship is as broad as it is deep,” he said. “Ever closer collaboration is good for India, good for the UK, and by working together to solve global challenges, good for the world.” 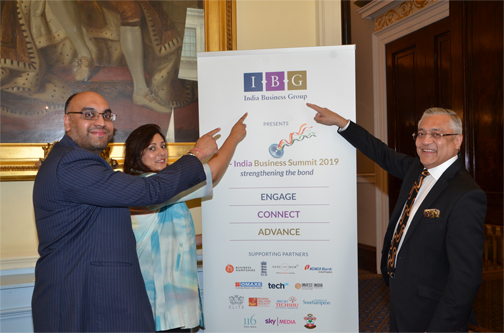 With the UK planning to leave the European Union, Mr Field said he looked forward to what the countries would achieve together in the next 12 months.

The invitation-only awards ceremony and gala dinner took place on 29 May 2019 at the Houses of Parliament. Now in its third year, the event recognises those who keep the UK-India special relationship alive and prosperous. It is organised and hosted by the India Business Group (IBG), a leading business advisory consultancy working in the UK, EU and India markets.

Earlier in the day, IBG brought together over 120 influencers, key businesses and academics from India and the UK, at its inaugural India-UK special business summit, to discuss and decide how to forge even closer links. According to Grant Thornton, a global independent firm of tax auditors, more than 800 Indian companies operated in the UK in 2018. Their combined revenues were worth £46.4 billion and they paid £360 million pounds in corporation tax or 7.75 per cent.  IBG chair, Professor, The Lord Patel of Bradford, said the success of the summit and awards was down to a deep understanding of a shared history, culture and language.

“We showcase success stories, inspire the next generation of entrepreneurs and promote greater flows of business, trade, investment and between the UK, EU and India markets,” said the peer and former UK government minister. “It isn’t just about making money either. It is about helping both countries thrive by enhancing both economies, creating jobs, utilising untapped skills and so benefiting Indians and Britains.”

The UK Government’s Maritime Minister Nusrat Ghani MP said she was delighted to support the summit, explaining that the maritime links between India and the UK were key to the prosperity of both nations. She explained that the two nations should continue to explore deeper collaboration on connectivity and infrastructure projects, especially post Brexit. The business summit was backed by key partner, Hampshire County Council.

IBG’s CEO and founder of The Indian Awards, Amarjit Singh said “I am amazed how the high level business leaders, senior officials, policy makers, thought leaders and prominent people from India and UK come together to cement this special relationship. In our post-Brexit world of uncertainty, what we need, and what we have, are two countries who want to do business with one another.”

The gala dinner was attended by a number of special guests and officials, including leading actress Shabana Azmi, Indian celebrity chef Sanjeev Kapoor, Sir Mark Walport, Sir David Payne and the Commonwealth Secretary-General, Patricia Scotland. Research by the Secretariat has found that when two Commonwealth countries trade with one another, it is 19 per cent cheaper, and the savings can be passed on to the consumer.

Secretary-General Scotland said, “This year we are celebrating ‘A Connected Commonwealth’, and the strong cultural and economic ties which exist between India and the United Kingdom contribute to the interconnecting networks of international trade and cooperation which enable individuals and communities from all our member countries to enjoy inclusive social progress and sustainable economic growth.

“I commend the India Business Group for its work to build on the many links of affinity and kinship which connect India and the United Kingdom, thereby adding to the health, hope and harmony of the 2.4 billion people of our worldwide Commonwealth family.”

Her Excellency, Mrs Ruchi Ghanasyham, the Indian High Commissioner to the UK said

India and the UK share a special bond that is strengthened by the people of the two countries. This “Living Bridge” is the mainstay of the business and cultural ties between India the UK. The Indian Awards have played a significant part in recognising the industry and creativity of business leaders and organisations active in the India-UK corridor. I would like to extend my best wishes to the organisers of the Indian Awards 2019.

The winners of each category are:

You can find more details on the awards website: http://www.theindianawards.com

Some of our Clients and Partners